Since the beginning of mainstream television, there have been many studies on the pathological effects of excessive television on the developing brain. The ‘popular’ consensus being that excessive television turns our kids into mindless zombies by numbing their minds and promoting a lethargic lifestyle. Likewise, smartphones have made their way into our daily lives in such an intrinsic way. If persons present with the same behaviours as those addicted to substances such as alcohol, nicotine and opioids then smartphone addiction may be a clinical issue and should be treated as such.

There is no direct experimental evidence that demonstrates a causal relationship between what is being commonly referred to as ‘cellphone addiction’. However, we know that “uncontrolled and excessive use of a smartphone can give rise to social, behavioural, and affective problems (Choliz, 2010)”. The reported symptoms of Problematic Smartphone Use (PSU) include “excessive use of the device, interference with educational, occupational and/or personal activities, a gradual increase in use to obtain the same level of prior satisfaction in relation to mood states, emotional alterations, and/or withdrawal symptoms when use is impeded (Billieux, Maurage, Lopez-Fernandez, Kuss, & Griffiths, 2015)”.

Although there is no causal relationship between PSU and behavioural or mood disorders, there is evidence showing an association between anxiety and PSU (Tavakolizadeh, Atarodi, Ahmadpour, & Pourgheisar, 2014; Kim et al., 2015). This would imply that persons that present with pre-existing disorders such as anxiety or depression may be at risk for PSU. In general, overuse of smartphones in some individuals may be associated with a form of psychological dependency, with a prominent feature being anxiety (Richardson et al. 2018). Teenagers with a lack of or minimal number of in-person contacts seem to be especially at risk for PSU.

The criteria used by various researchers vary. Within the last decade, we see newly introduced references to pathologies such as “Nomophobia” (No-Mobile-Phobia), “FOMO” (Fear Of Missing Out) – the fear of being without a cell phone and “Textiety” – the anxiety of receiving and responding immediately to text messages (Taneja 2014). The following table, extracted from the Diagnostic and Statistical Manual of Mental Disorders (DSM–5) and published by the American Psychiatric Association (APA), compares symptoms associated with PSU and the diagnostic criteria for substance abuse and gambling: 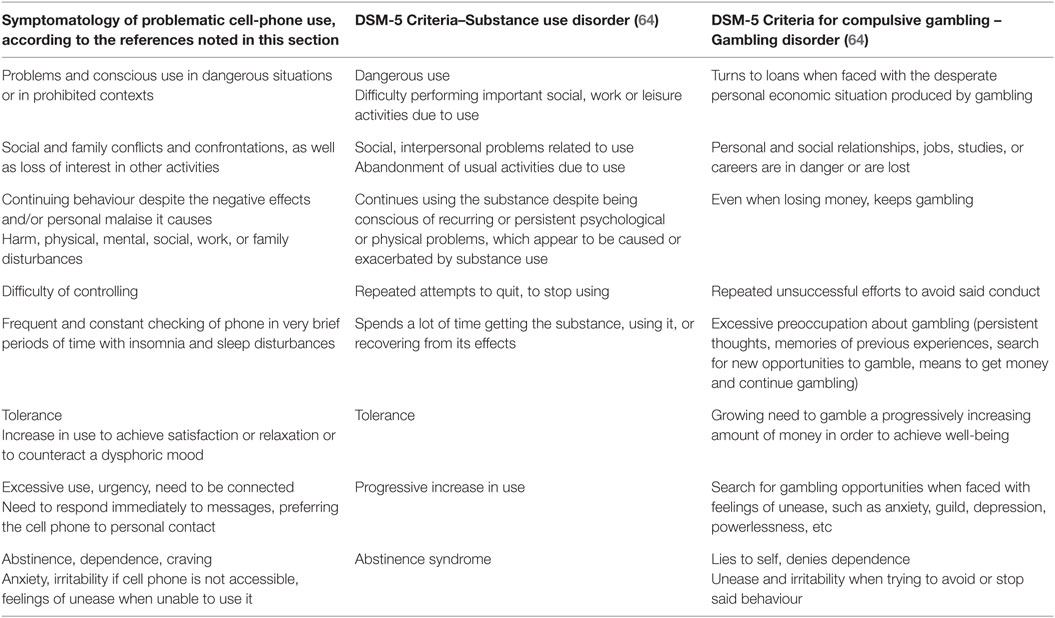 A separate but related mental health issue is Internet Addiction Disorder (IAD). Investigations into its pathology are typically focused on psychological examinations, however, a recent study investigated brain structure and function using Diffusion Tensor Imaging (DTI) to investigate white matter integrity (the nerve fibers, or axons, that connect various parts of the brain). The researchers concluded that “IAD demonstrated widespread reductions of Fractional Anisotropy (FA) in major white matter pathways and such abnormal white matter structure may be linked to some behavioural impairments” (Lin et al. 2012). These findings are consistent with behavioural observations of adolescents afflicted with IAD.

According to Psychology Today online, “Dopamine is a neurotransmitter that helps control the brain’s reward and pleasure centers. Dopamine also helps regulate movement and emotional responses, and it enables us not only to see rewards, but to take action to move toward them”. Dopamine is popularly referred to as the pleasure chemical. What does this have to do with IAD or PSU (smartphone addiction)? Dopamine is associated with the gratification you receive each time you receive a ‘like’ on one of your Facebook or Instagram posts, or each time you receive a response to your WhatsApp message, and even the anxiety reduction when your immediately grab your smartphone to ‘Google’ some seemingly ‘important’ factoid. According to Maharaj (2018) “Consistent and more regular releases create a compulsion loop similar to that which is associated with nicotine, cocaine, and other substance addictions”.

How many of us feel anxiety when we are without our phones for even a few minutes? Do you sleep with your cellphone nearby or have it with you in the bathroom? How many times have you looked at it to check your social media feed or text messages? The cellphone is a relatively safe place to socially connect, to seek information and to do activities when used in moderation (Nakhid-Chatoor M. 2018). However, when this comforter is removed, there is typically emotional backlash and withdrawal symptoms. So how can we ‘kick the habit’? Not surprisingly, the treatment model is similar to that for most other addictions (i.e. cognitive behaviour therapy). It is important to replace negative habits with other equally stimulating and positive endeavours. Cultivate diverse, stimulating and healthy interests that provide meaning. Spend time learning a new language online rather than passing your time observing the public lives of others on Instagram. Surround yourself with the necessary social support from friends, family and peers. Recovery from any addiction is possible. Just say ‘yes’.

This site uses Akismet to reduce spam. Learn how your comment data is processed.